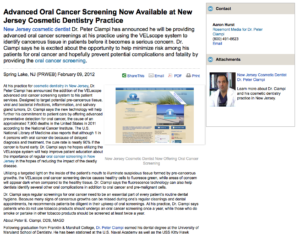 New Jersey cosmetic dentist Dr. Peter Ciampi has announced he will be providing advanced oral cancer screenings at his practice using the VELscope system to identify cancerous tissue in patients before it becomes a serious concern. Dr. Ciampi says he is excited about the opportunity to help minimize risk among his patients for oral cancer and hopefully prevent potential complications and fatality by providing the oral cancer screening.

At his practice for cosmetic dentistry in New Jersey, Dr. Peter Ciampi has announced the addition of the VELscope advanced oral cancer screening system to his patient services. Designed to target potential pre-cancerous tissue, viral and bacterial infections, inflammation, and salivary gland tumors, Dr. Ciampi says the new technology will help further his commitment to patient care by offering advanced preventative detection for oral cancer, the cause of an approximated 7,900 deaths in the United States in 2011 according to the National Cancer Institute. The U.S. National Library of Medicine also reports that although 1 in 4 persons with oral cancer die because of delayed diagnosis and treatment, the cure rate is nearly 90% if the cancer is found early. Dr. Ciampi says he hopes utilizing the VELscope system will help improve patient education about the importance of regular oral cancer screening in New Jersey in the hopes of reducing the impact of the deadly disease.

Utilizing a targeted light on the inside of the patient’s mouth to illuminate suspicious tissue formed by pre-cancerous growths, the VELscope oral cancer screening device causes healthy cells to fluoresce green, while areas of concern will appear dark when compared to the healthy tissue. Dr. Ciampi says the fluorescence technology can also help dentists identify several other oral complications in addition to oral cancer and pre-malignant cells.

Dr. Ciampi says regular screenings for oral cancer need to be an essential part of every patient’s routine dental hygiene. Because many signs of cancerous growths can be missed during one’s regular cleanings and dental appointments, he recommends patients be diligent in their upkeep of oral screenings. At his practice, Dr. Ciampi says patients who do not use tobacco products should undergo an oral cancer screening once a year, while those who do smoke or partake in other tobacco products should be screened at least twice a year.

Following graduation from Franklin & Marshall College, Dr. Peter Ciampi earned his dental degree at the University of Maryland School of Dentistry. He has been stationed at the U.S. Naval Academy as well as the USS Kitty Hawk aircraft carrier, while serving with the United States Navy Dental Corps. After his military service, Dr. Ciampi went on to complete a postgraduate training program in cosmetic dentistry at the University of California, Los Angeles Center for Esthetic Dentistry. He has also participated in several continued education courses at the Dawson Center for Advanced Dental Studies in St. Petersburg, FL and the Pankey Institute in Miami, FL. Dr. Ciampi is a clinical assistant professor at the University of Pennsylvania School of Dental Medicine and a forensic dental consultant with the office of the New York City chief medical examiner, as well as having served as an appointed Peer Review Moderator for the New Jersey Dental Association. He has recently achieved mastership status, the highest honor distinguished by the Academy of General Dentistry, following completion of over 1100 hours of continued education.

Located at 310 Morris Avenue in Spring Lake, NJ, Dr. Ciampi and his practice, Spring Lake Dental Care, can be reached at (732) 449-5666. He can also be contacted online via the website springlakesmiles.com or facebook.com/SpringLakeSmiles.

For Every Budget
Ready To Schedule Your Appointment?